<![CDATA[Dylan Tan <a href="http://www.businesstimes.com.sg/lifestyle/movies/getting-intimate-with-the-ladies-of-siew-lup">The Business Times 24 February 2017 You would think that for any aspiring actress making her big screen debut, the scariest thing would be having to disrobe for the camera or getting physically intimate with a co-star. But the buxomy leading ladies of steamy slasher flick Siew Lup had other more pressing concerns – namely the action sequences in the film. 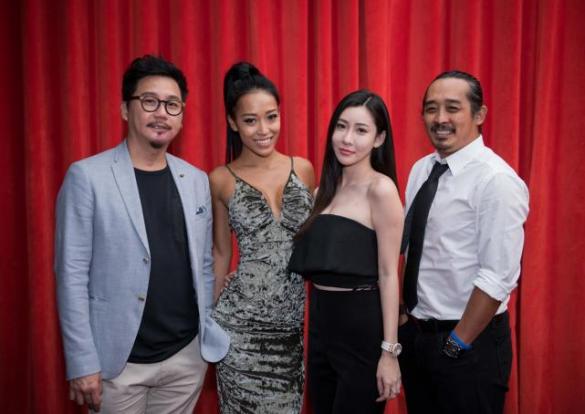 “I don’t have any experience fighting so I did some of that in an unnatural way initially on camera,” coos Rebecca Chen, who adds that fortunately, her more experienced co-star and stuntman, Sunny Pang, came to the rescue. “It’s a good thing he was there to guide me.” She plays a former prostitute who bares her killer instinct; while Pang plays her impotent husband in the film which is a follow-up to veteran TV director Sam Loh’s erotic thriller Lan Tong (2014). Both movies were selected for the Singapore Film Festival and had sold-out screenings. Chen’s sentiments are shared by Siew Lup’s other equally well-endowed actress Melody Low, who plays a terminally-ill woman looking to experience true love before she dies. The 24-year-old YouTube star says that fighting Chen’s character and playing dead posed a challenge for her: “(Next to those), I think the sex scenes are actually not that bad!”

But that’s not to say the on-screen nudity wasn’t an issue both first-time actresses took lightly. Chen admits that it was a concern for her, but her work as a professional pole-dancer and freelance model helped her feel confident in her own skin. It also helped that the 26-year-old was single when Siew Lup was being shot and even though she’s now attached, it won’t influence her decision in taking on such a daring role. “I would still do it but I would talk to my boyfriend about it first,” she explains. “He should understand, given my line of work in the entertainment industry.” Chen also shares that filming Siew Lup’s sex scenes was exhausting. “We had our privates taped up and I had to moan quite a bit,” she recalls. “It was actually more tiring than anything else because it went on for about one or two hours.” Low was initially considered for Chen’s role, but turned it down as she thought it was too daring.

The one she took on still required her to disrobe for a steamy bathtub sex scene with co-star Louis Wu but the nudity is implied rather than explicit. “That is my limit,” quips Low, who has previously posed for the now-defunct local version of UK lads’ magazine FHM and taken part in Miss Singapore Universe. She has also starred in music videos for local rappers Tosh Zhang and Shigga Shay where her ample bustline and generous cleavage tend to hoard the spotlight for obvious reasons. Low admits the fear of being stereotyped into certain types of roles but she’s confident that things will work out on their own; and she can be seen playing a student in the upcoming local comedy, Lucky Boy. “If a script is good, I’ll take on any role,” she says. Chen shares the same view and says that she is open to any other opportunities that might come along. “I’ve always wanted to act for the longest time,” she declares. “And I’m glad I took on this role despite the challenges.” Timely tribute to the sexploitation genre The odd arthouse drama aside, Singapore cinema is largely characterised by way too many Jack-Neo-type feel-good, slapstick comedies and horror films for the industry and audience’s own good.

Kudos to local veteran television director Sam Loh for taking a brave step to change that with his erotic thriller Lan Tong (2014). It pushed the censorship boundaries with its graphic nudity and violence; and was screened uncut at the Singapore Film Festival but had to be snipped slightly for general release. But that hasn’t held Loh back as he pulls no punches with Siew Lup, the spiritual sequel to Lan Tong, which is bigger and bolder in more ways than one. It has been passed uncut even though the blood flows more freely and the sex scenes are steamier, thanks to the two leading ladies, Rebecca Chen and Melody Low, leaving their inhibitions at the door. The shock value is definitely there but the slightly predictable plot lets the film down. Inspired by the adulterous Pan Jin Lian character in the classic Chinese novel Jin Ping Mei (The Golden Lotus), Chen plays Mia, a former prostitute who is freed from her trade after Quan (Sunny Pang), a butcher, buys her out.

They get married but his sexual inadequacies put a strain on their relationship and it doesn’t take long before Mia finds comfort in the arms (among other body parts) of young funeral director Wu (Louis Wu). But that affair also sours when the terminally ill Xuan (Low) enters the picture and things get steamy between her and Wu before it leads to a very bloody climax. Siew Lup pans out like those Category Three Hong Kong sexploitation flicks of the 90s with its soft-porn moments. It’s a genre that has almost gone out of fashion in Asian cinema for years now so it’s very timely that Loh has stepped in to fill the niche. The erotic thriller is not for everyone – where’s Yangtze Theatre when you need it most – but for those who like their films trashy, the search ends here.

Woman Arrested For Calling Ex-Boyfriend More Than 27,000 Times in A Week! He Almost Gone Into Depression!

Patrick Teoh : Who Is Anwar Ibrahim ? – An Ultra Racist That Traumatised A Young Chinese Girl – Cried & Too Fearful To Share What She Had Gone Through