Those of you whom believe that the Illuminati exist, you were right all along. Rumors about the existence of the Illuminati as a secret society that provides celebrities fame, richness and popularity is true, well of course according to Lady Gaga herself. We all knew that Lady Gaga is unique and different, and most of her videos are with Illuminati elements. She’s not the only one in the Illuminati society, there are other celebrities rumored to be in it too are singers like Jay-Z, Katy Perry, Drake and more.

The pop star, Lady Gaga however, decided to share a story about her membership with the Illuminati and claimed it was her biggest regret.

Lady Gaga has diagnosed with a medical condition called the painful fibromyalgia syndrome (FMS) and has been suffering from this long time illness that she claim she got ever since she allowed “dark forces”to manifest themselves in her body. In short, she basically ”sold her soul” to the Illuminati in the early years of her career, as reported by World Truth.com.

Gaga will be in a documentary called Five Foot Two, an upcoming TV documentary produced by Netflix. The documentary features warts-and-all portrait of the troubled superstar. She spoke openly about it and the final cut of the documentary was said to be footages and montage of rehearsals, studio sessions, public appearances, private late night conversations, medical appointments and loads of tears.

Many of the scenes were not featured on the documentary as said by the production staffs as it was “orders from above. Ooooh, creepy!

The production staffs also mentioned that while they were discussing about the scenes that were cut out, Lady Gaga mentioned about exorcism being done by a priest that she met. She had met with the Catholic priest to discuss about her getting rid of the “dark spirituality” that she had invited in during some “satanic rituals”.

In 2006, after Gaga performed at a burlesque club in New York’s Lower East Side, that was the day it all changed in her life. She was inducted to join the Illuminati for the first time.

She described the feeling as “very real and visceral, not metaphorical at all.”

“I had just been on stage, it was a good show, I was high on the love and applause from the crowd.

“I was outside lighting a cigarette, thinking about scoring some more cocaine.”

“I was aching for more. More of everything. I just wanted to feel good. Feel anything.”

“Then this man, a strangely ageless man in a suit, spoke to me.”

“He was leaning against the wall, smoking and he said to me”

“I think you’ve got what it takes. Do you want it?”

“But he smiled and said Everything. Success. Fame. Riches. Power. Do you want it all?”

“I looked at him curiously, I couldn’t work him out.”

“Then he just stood there and sang one of the songs from my routine earlier.”

“It was otherworldly. I stared at him like he was a dark jewel dredged up from the deepest ocean.”

“I got down on my knees and asked him who I should praise?”

“I looked him right in the eye and told him I wanted it all. I told him I’d do anything.”

Gaga calls the man her “illuminated prince.” Before she became famous, she had a little commercial success, public recognition but she was also a struggling performer whom had only a chance to perform in dive bars, burlesque clubs, and other late night places. She was able to achieve it all, make music, perform but of course, in exchange for her “soul”.

Right after she agreed to do anything, the two of them “concluded a deal” outside the Mercury Lounge in New York City. She instantly realized that “success was a cinch”.

In exchange for her soul, Gaga managed to create great music, from which she started becoming famous, and working with well-respected collaborators, producers and businesses was lining up at her doorstep waiting to work with her.

One year after, Gaga became one of the most biggest selling artists in the world. She said, “His promises came true very quickly. At the start I thought we made a good team. But it wasn’t long before I began to suffer.”

She had to fight with conflicting forces battling for supremacy inside herself for years. She was constantly battling with herself in the documentary.

She had two personalities, one was driven to perform and the other was battling with “dark forces”. She fought really hard to breakfree from the Illuminati-controlled record industry and to break her contract with her “dark prince”. Throughout years, she suffered from physical illness, fibromyalgia, a chronic pain condition.

Nothing comes free in this world. They may give you special powers, beauty, talent and wealth but it does not last. Gaga said,

“This is the reason why so many people who dabble in the dark arts are so unhappy. They flicker bright like a morning star and then wind up committing suicide or destroying themselves with substance abuse.

Gaga even shared a picture she posted on her Instagram page saying this, 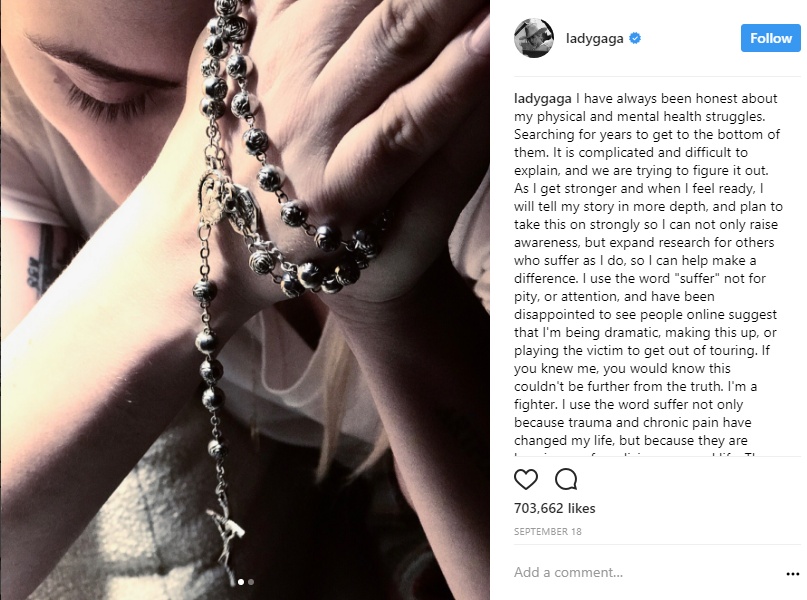 Poor Gaga, we hope she finds her way back to the right path and we hope her fans continue to support her. Thankfully, for someone facing such troubles, she’s strong enough to get through it.